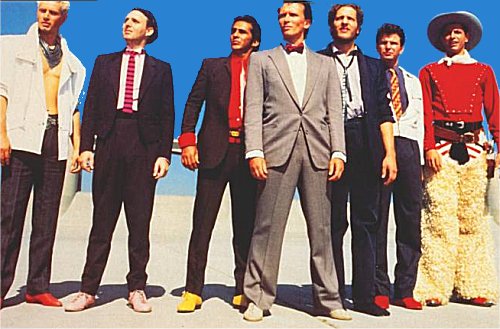 Kevin Smith announced on his Podcast ‘Hollywood Babble-On’ that he would be helming a reboot to the Buckaroo Banzai universe. Universe may be a strong word to use over a single movie, but the movie is that AWESOME. He will be bringing ‘The Adventures of Buckaroo Banzai Across the 8th Dimension’ to TV, which I think is a good fit. It’s great that a fellow dork such as Smith is spearheading this, but also great to have a longer format such as television to tell this story.

Here is what Smith had to say…

“MGM said, ‘Hey, we heard you like Buckaroo Banzai…we took Fargo and turned it into a TV show and it’s won awards, and we have another property we want to do that with, and we’re wondering if [you’re] interested.’ So I went in and met with those cats, and we talked about ‘What would you do to turn it into a series?’ That’s what we want to turn it into. I was like, ‘Oh my Lord, well I’ve loved this movie for forever. If you’re going to do that, basically you just do the entire movie for season one, and then season two you finally do the sequel we’ve all dreamed about, Buckaroo Banzai vs. The World Crime League…in the next month, we take it out and try to find a home for it.”

I know those of you who haven’t seen the movie have a ton of questions after watching such an awesome trailer. I cannot take you on the journey for answers, only you can walk the path alone….and watch this movie, NOW.

Now I hope the song gets stuck in your head, like mine, for the rest of the day. I loved this movie as a kid and I still love it today. It amped up all da cheese in the best ways possible, I think Jeff Goldblum’s  character served as the new guy in the group to point out the wacky, awesome shit in this universe. They have gone back and fleshed out things in comics, but as someone who doesn’t get to the racks anymore, TV is my only place for dork entertainment. So yes please, make this happen. Also, after this movie I wanted tabi boots soooo bad, I never got them though, which was for the best as I was bullied enough for being a dork.

And remember….”no matter where you go… there you are”.

3 thoughts on “Kevin Smith To Get BUCKAROO BANZAI AND THE HONG KONG CAVALIERS Back Together!”