Hello, welcome to a new weekly feature here at My Side Of The Laundry Room. Monstrous Mondays are posts that will talk about something that I am quite passionate about, MONSTERS. Well, not exclusively monsters but also creatures, aliens, beasts, and other supernatural beings. These critters and characters can come from all facets of pop culture, no where is safe. Movies, cartoons, comic books, novels, RPG books, toys…the list goes on and on for where monsters dwell.

For the first installment I’d like to talk about a beast that has roamed the dungeons and slayed would be adventurers since 1975, The Umber Hulk. 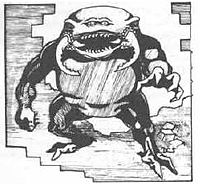 This large, gorilla like creature made it’s first appearance in the very first Dungeons and Dragons supplement Greyhawk.  It was described as human-shaped and with gaping maws flanked by pairs of exceedingly sharp mandibles. When it found its way into the Advanced Dungeons and Dragons Monster Manual in 1977, the Umber Hulk’s description grew to include that it is a subterranean predator with iron-like claws that enable it to burrow through solid stone, and its eyes cause a dangerous confusion in opponents. See, the Umber Hulk has two sets of eyes. Two smaller eyes are set in the center of its head, while another set of larger, insect-like eyes set on the sides of its head. If you were to gaze into all four eyes at the same time you would be rendered confused and easy prey for the creature.

In 1983 the Umber Hulk had its own toy in the Dungeons and Dragons toy line. Thanks LJN. 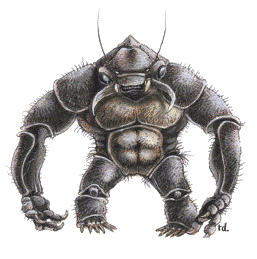 For 3rd Edition in 2000, the Umber Hulk had its most drastic cosmetic redesign and it has been a look that has continued with the monster until today. 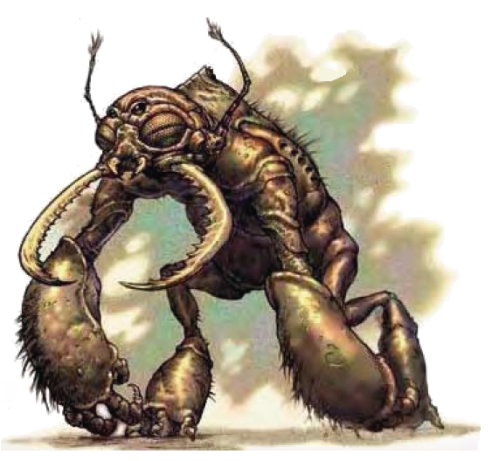 Another thing that changed with this beastie is that it has gained a basic intelligence. Umber Hulks can speak Terran and often are smart enough to make traps and use basic weapons. These big brutes are easily dominated by illithids though and are used as bodyguards and soldiers.

In the 2003 book Savage Species it presented Umber Hulks as a player characters. AWESOME. Never got a chance to try them out, but hopefully I will one day.

The 4th and 5th Editions Umber Hulks are remained almost unchanged from the version introduced in 3rd edition.

Umber Hulks were one of the first truly original creatures created for Dungeons and Dragons and it is great that they have survived over four decades. They were one of the first creatures that drew me into the world of D&D because of the (now very dated) artwork from the first edition Monster Manual looked. With the book’s black & white art style and at times grade school level art prowess, it felt like D&D was made by us-for us (dorks that is).

But the best part…use the right spell, and they really know how to cut a rug.