5 Forgotten Ninja Toys Of The ’80s

One of the most defining things about “Boys” toys of the ’80s was the Ninja. Ninjas were EVERYWHERE and EVERYONE loved them. They showed up in every genre, from Sci-Fi to Fantasy and every medium, from video games to cartoons. No matter the setting or time period Ninjas always possessed the same traits – they were one with the shadows, skilled fighters, and had some degree of “magic”.  These “magic” ties or ties to some supernatural ability is what makes Ninjas such a fun profession (?). Mix in some rad gadgets and tricks of the trade and you have the perfect recipe for AWESOMENESS!

Created around the same time as Hasbro’s G.I. Joe, Eagle Force was Mego Corporations take on the fantastical world of the military. Created by comic book vet Paul Kitchner and Mego V.P. of R&D Bill Baron, Eagle Force had a very close resemblance to G.I. Joe, which was first released in 1981. The only differences between the two toy lines were that Eagle Force only stood at 2 3/4 inches tall and were made from die-cast metal. This wouldn’t be the last time Kitchner would work in figures this size as he had a hand in creating M.A.S.K. for Kenner and Dino-Riders for Tyco. Eagle Force would be one of the last toy lines Mego produced, as they closed their doors the same year.

Kitchner’s art was the best part of this doomed toy line. Kitchner’s art really made the character of Savitar pop off of the package, the figure….not so much. Savitar the Assassin came at a time in the very early ’80s when the ninja character was an automatic bad guy. Since the time martial arts films had broken into the America cinema the ninja was a villain, rightfully so. Working for the villain organization R.I.O.T. -or Roving International Organization of Tyranny, Savitar was equipped with a ninjato and a machine gun. Other than that not much is known about Savitar. He was sadly just a stereotypical bad guy and didn’t have much of a fleshed out background. 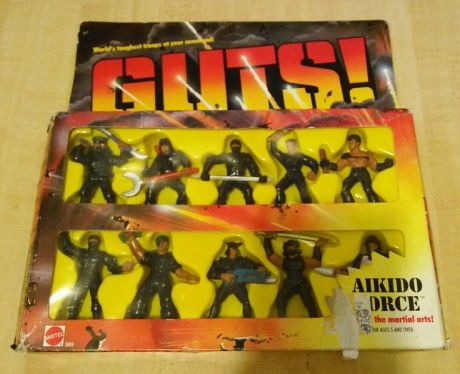 in 1986 Mattel aimed to change the world of “little green army men” with their toy line GUTS!. Each character now had a spiffy paint job, a name, and included modern braches of the military like Laser Fighters(?). Capitalizing on the awesome, far-out and fantastic military toys like G.I. Joe, GUTS! had to have some Ninjas. These Ninja figures were simple but very awesome. They came in a couple different styles of armor and gi and with very authentic weapons like ninjato, bo staff, and bladed rifle (?).

All and all, I loved these figures. they were simple but great for playing outside because you didn’t have to worry about dirt, water, or sand gunking up any joints. These little dudes had vehicles and accessories just like their bigger and more moveable brethren. There were 6 different sets with 10 characters in each set. They had Jungle Fighters, Green Berets, Underwater Demo Troops, Aikido Force, Ground Troops, and Laser Fighters. 60 Total characters, all at a low-low price. Sadly with so many bigger and better choices in the toy aisles, GUTS! didn’t last long. 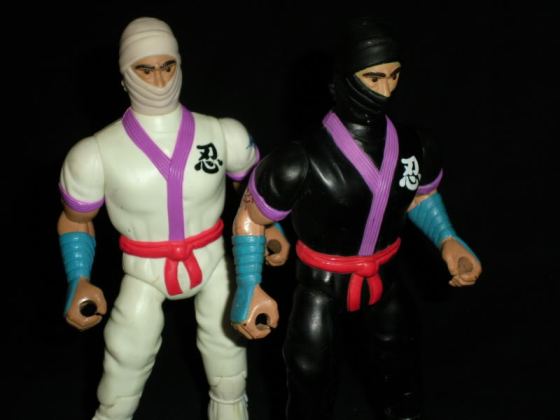 Ninja’s were all the rage by 1986. They were starting to use their shadow magic to infiltrate all media. In the next year Ninjas would take a comedic turn under the popularity of the Teenage Mutant Ninja Turtles. But in 1986 they still had a bit of mysticism and danger left in them. Another trend also running rampant in the mid-to-late ’80s was the whole R rated movie to cartoon switcheroo. Rambo: First Blood Part 2 was an incredibly popular movie. With its release in 1985, Rambo spawned a pretty cool toy line and a cartoon that ran for 65 episodes. Mixing Ninjas with an R rated property such as Rambo should have been a win-win situation.

I have to be honest, I can’t remember if the white Ninja was good and the black Ninja was bad or if they both were bad guys. Either way both figures had an action feature weapon and were pretty well constructed. The Black Dragon Ninja came with a crossbow that could shoot while the White Dragon Ninja came with a backpack that had a spring loaded arm that could instantly put a sword in his hand. Both figures came with great Ninja weapons that could be used by them or other characters in the toy line. My Rambo wasn’t above using a ninjato or crossbow when the chips were down. 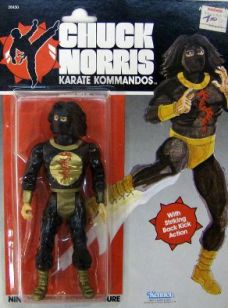 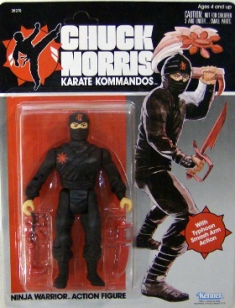 You can’t even think of the karate icon Chuck Norris without visions of the ancient art of ninjitsu popping in you head. Chuck Norris is the mortal enemy of Ninjas everywhere. He is the polar opposite of the Ninja in everyway with his hard kicking, American eagle screeching, burly Kung-Fu. So Kenner and Hanna Barbara did the only natural thing, make Ninjas the enemy in the toy line and cartoon for Chuck Norris: Karate Kommandos. Ninjas weren’t the biggest foe in this toy line or cartoon, rampant racial stereotypes were. Even the fact they tried to rip-off Indiana Jones’ Short Round with Chuck having a young, wise-ass, Asian ward named Too Much. C’mon Chuck, really!!

The toys were ok and had the same action features most action figures did at the time. The thing that stands out in my mind (other than it being Chuck Norris) is the absurd weaponry. Whoever designed this stuff must have thought “Well if one blade on a spear is cool, than a dozen is totally awesome,” -or- “It would be really rad if throwing stars had chains so you could use them over. Remember, waste not, want not.”. This entity of ’80s childhood is a time capsule of everything wrong in the world of toys, cartoons, and comic books and the pursuit of a quick buck. Hell, even the Mr. T cartoon had more heart and soul than this. 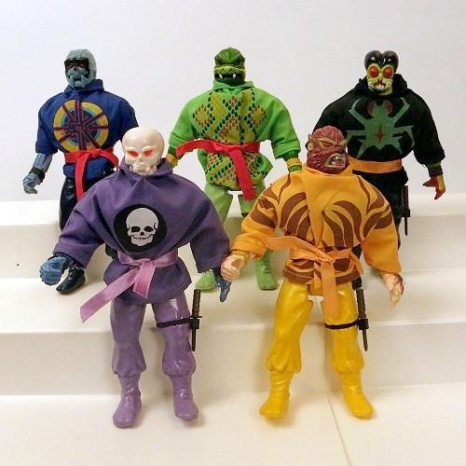 Ninja Assassins were the counter part to the Ninja Defenders, and they were so much cooler than those square Defenders. The Ninja Defenders were your run-of-the-mill Ninjas, although I really liked the one decked out in camouflage. Come to think of it he had a very Rambo look to him. Anyways, the real “heroes” of this toy line were the villains, The Ninja Assassins. You had a robot guy Ninja, a spider guy Ninja, a lizard guy Ninja, a skeleton guy Ninja, and my favorite the werewolf Ninja. In a world where a simple black outfit and mask made you a Ninja it was freak’n awesome to have some monster Ninja dudes.

The whole line was pretty cool. All of the heroes and villains had real cloth masks that you had to tie around their heads. They also had real cloth Ninja gi’s and rubber holsters for their daggers. They all came with different weapons like swords and bows and all had the chopping action arm movement controlled with a little switch on their backs. These were another cheap toy that I had a few of, but they were made solid and were bigger than most toys at the time. The fact that they went the monster route will always make this toy line one of my favorites to remember. One day I will have to hunt some of them down.