Like I have done a few time in the past, I go back to those dark times in my past and drudge up the feelings of loss and disappointment over toys I never got. This time it’s all about Transformers and believe me when I say I could do a few lists just about this awesome and popular toy line.

Anyways, bring on the pain….

For some reason i remember the knock-off version as much as the official version when i think back about Shockwave. In my memory I also feel like I saw the knock-off gray version of Shockwave before seeing any other Transformers way before 1984. I vividly recall it being in the very small toy section of a local camera store/pharmacy near my house. Maybe with the camera store dealing with Japanese manufacturers of cameras they had an inside track to Japanese toys? Either way my first memory of Shockwave was the gray version.

I wanted either one because i just loved the design of the laser pistol and I think his robotic form is bad-ass.Everything to his cycloptic eye, to his light-up blaster arm, to his real rubber hose are awesome. His only downside was the front of the laser pistol was removal and had to be removed in order for him to transform into his robotic form.

I can remember a neighbor down the road having him and I was so pissed because him and his brother used him like any ol’ toy gun. Shockwave was battered, broken, and rusted from being left outside. Man, this memory is turning up some anger that I forgot about….next on the list. 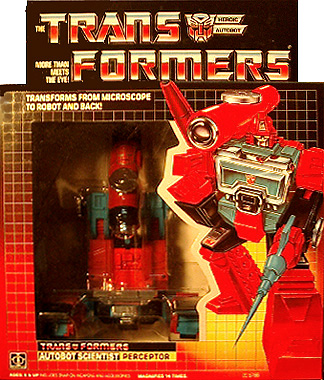 What parent wouldn’t want to get an educational toy for the kid, one with ties to a very popular toy line that would make said kid excited about learning and discovery?

My parents, that’s who.

In certain circles Preceptor is seen as a horrible Transformer and ends up on many “Worst” or “Lamest” lists. But I honestly don’t care. To me, he is awesome. I have discovered that I’m a sucker for color schemes and just the appeasing nature of some colors are enough for me to like something. I truly love the colors of Preceptor and that is a main reason I like the character, weird I know.

Preceptor was also pretty cool in the cartoon. He was a scientist but when he needed to his lens tube would become a powerful laser to kick Decepticon ass. I find it funny now watching the old episodes that when the Transformers needed to get a close-up view on Teletraan 1’s screen they would call in Preceptor, you know instead of just hitting an enlarge screen button or anything.

OK, lets get real for a second here. How much could this really have cost back in the day? I’m sure it was a pretty low price for 2 Transformers. Cheap enough for my parents anyways.

Ravage is simply awesome. Awesome idea. Awesome design. I just had to have him, I still do. Adding insult to injury, I did get Soundwave for Christmas and I’m still pretty impressed about that. I still have him, though he is a little worse for wear. Soundwave originally came with Buzzsaw and that was it. All the other cassette tapes were sold separately. Now if you were a kid that watched the show you know that the one tape that they never showed was fucking Buzzsaw. WTF. It was easy enough to pretend Buzzsaw was Laserbeak but there was no imagination big enough to pretend Buzzsaw was Ravage.

I did try though with a little plastic panther I got in a bag of plastic zoo animals. Not the same. I guess that goes on the list of pretending lame shit was cool next to when I pretended a shoebox was the Thunder Tank. 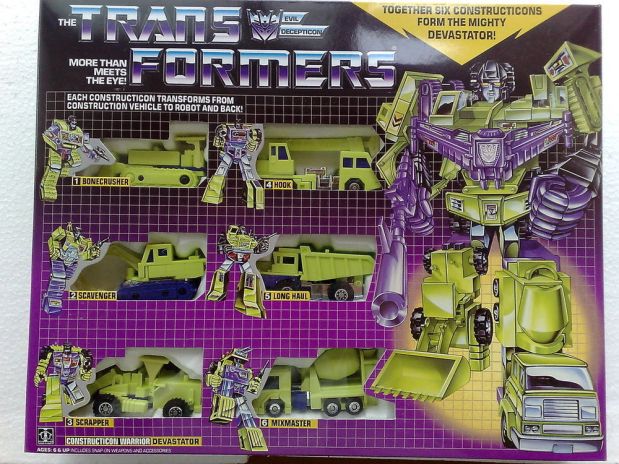 I’m sure Devastator would be on a lot of people’s lists when talking about awesome Transformers toys they never got. I don’t remember any kids I knew having this monster of a toy. I don’t remember exactly, but I would assume Devastator had a hefty price tag. I do remember my wishes for him fell on deaf ears because of price.

Again, I think the one thing that makes Devastator work is his color scheme. The combination of neon green, blue, and purple set him apart from most other toys at the time as well as other Transformers. Add the fact that 6 Transformers combine to become one giant Transformer was a break through in toy engineering and science…yeah, it’s a real science. Look it up!

When it came to the cartoon, there was no one as tough or bad-ass as Devastator. Megatron called him in to clean up the mess his bungling Decepticons caused and it took a special kind of Autobot to take him down by the end of the episode.

Sadly by the end of the first season everybody was creating their own Combiners. The Autobots had two and even Starscream made his own from discarded WWII vehicles. The Combiners became a gimmick to sell more toys but none came close to the original, Devastator.

There was just something about Wheeljack. It could have been the unique sculpt of his head, his awesome Lancia Stratos Turbo 5 rally car vehicle mode, or how the fins lit up when he talked in the cartoon.

I think a problem for a lot of the first wave of Transformer toys in 1984 was they were under produced. Maybe because of how innovative they were Hasbro didn’t want to release to many and under perform because kids hadn’t seen anything like them before. I’m sure there is a right answer but I’m content enough with the story I have created in my mind.

Either way there were a lot of the first wave I wanted but never saw on the shelves as a kid. Now that doesn’t mean I would have gotten them, but not seeing them made the disappointment not sting as much.

One of the best things about having kids into Transformers is that I can always go back and try to get one of the versions of these toys whether it be G1 or one of the newer ones that pays homage to the first generation. Lucky for me my son loves Wheeljack so it’s only a matter of time until I can finally get a chance to play with him.